Posted on September 5, 2013 by Pastor Andrew 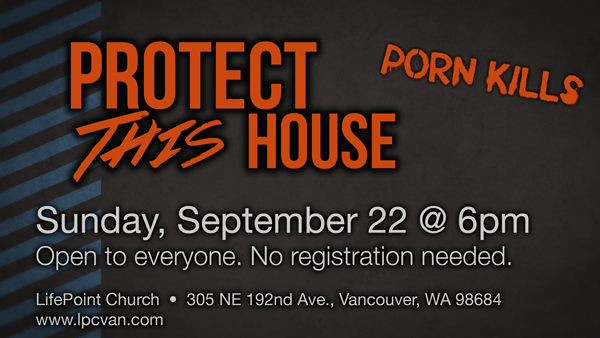 On Sunday night, September 22 @ 6pm we’ll be putting on a seminar at LifePoint on issues relating to pornography and the Christian. Everyone is welcome to attend, and I would highly recommend it. In ten years of pastoral ministry, including many in youth ministry, I have come to the realization that ignorance and denial abound in the church world regarding pornography, sexual addiction, and sexual deviance.

We could read stats all day, but after 10 years in youth and college ministry I don’t need stats, personal stories suffice. The reality is the problem is getting worse as technology advances. Ten years ago in youth ministry we would wait until high school ministry to begin confronting these realities. Today, the average Christian kid is first exposed around 5th or 6th grade, the average in a non-Christian context around 2nd or 3rd grade. That’s a subjective estimate on my part, but I could footnote hundreds of anectodal accounts to support it. As Christians we can either get educated, taking action to protect our homes and children; or we can bury our heads in the sand. There is no middle ground on it. To pretend it’s not there is not akin to leaving your doors unlocked at night. It’s more like inviting predators into your home. At the end of the day it’s a heart issue, but the accessibility of it doesn’t help. As I said, I didn’t have a laptop until I was out of college. The fourth grader at my daughter’s elementary school who doesn’t have an iPhone is now the exception to the rule. When you and I take an internet capable device and put it into the hands of our children without securities in place, it’s like handing them a loaded gun. Only this gun is loaded with porn—which does violent damage to both body and soul.

I realize these are strong words, but my goal is not to cause fear. I think I’m trying to cause outrage, not fear. As Christians we have nothing to fear, but we have a responsibility to protect, educate, and be ambassadors of Christ’s redeeming love and grace. There is help. At LifePoint, in events such as this Protect This House seminar, we’re doing just that. Please mark your calendar and do everything you can to join us. Please spread the word and bring others.

There will be four speakers at this seminar. Joining me in giving presentations will be our youth pastor Drew Saccenti, Jim Connett (one of our Elders who has decades of experience in the tech/securities/computer programming world), and Terry Bell (a member of LPC who is a professional counselor with years of experience working in this area). We’ll cover everything from the biblical and theological realities of the issue, to practical ways which we are handling these things in our various ministries, to details and resources on how you can literally technologically protect your home and devices, to the hope available in the redeeming power of the Holy Spirit.